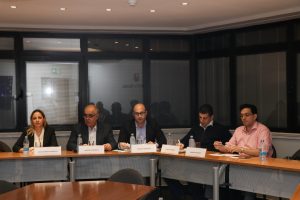 In March 2017, the Commission presented its White Paper for the Future of Europe that included reflections and scenarios about the future of European integration. This was followed by a pan-European effort to enact a Citizens dialogue with the aim to engage stakeholders by presenting their ideas and thoughts on this issue. In this context, the Center for European and International Affairs – University of Nicosia organised together with TEPSA a public seminar analyzing how EU issues played out in the recent Cypriot Presidential elections (February 2018). This event aimed to assess empirical data derived from Candidates’ programmes, interviews and debates, along with party programmes  and opinion surveys, e.g. Eurobarometer. The following questions were discussed: 1) how do national campaign issues relate to EU policy debates? 2) how are EU affairs perceived by citizens and national parties, and 3) what is the possible impact of the national elections in question on Cyprus’s position in upcoming decisions on the future of European integration?