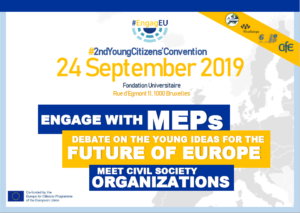 During the event, Members of the European Parliament from different Parliamentary Groups will engage in a debate focusing on the topics of the #EngagEU Manifesto (European identity, environmental policy, integration policy and foreign policy). Following the debate, a Civic Engagement Fair will take place, where several civil society organizations will present their work and how young Europeans can get engaged in civil society.