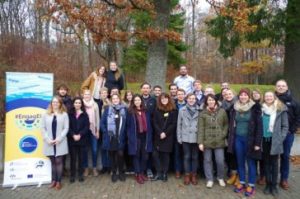 On 29 and 30 November 2018 the Institut für Europäische Politik (IEP) and the participants of the #2ndYoungCitizens’FutureLab were hosted at the Europäische Akademie Oztenhausen (EAO) in the frame of the project #EngagEU, co-funded by the Europe for Citizens Programme of the European Union. The topic of the discussion was “Security, Migration and the Future of Europe: Turning Moods into Opportunities” which was intensively debated by 30 young citizens from six European countries. They developed ideas and visions for the future of the EU and its asylum and migration policy. The results were also presented and further discussed at a public Vision Night in Saarbrücken with around 100 citizens. #EngagEU invites young EU citizens to take part in a broad consultation and idea development process till March 2019 aiming to strengthen the voice of young citizens in the European elections campaigns 2019 and to set the next European Parliament’s agenda with their visions and ideas.

The discussion facilitator Alexander Kobusch (University of Tübingen) introduced the topic of the debate in the context of the link between security, development and migration politics – the “Security-Development-Migration-Nexus”. Core to the discussion was the question how those three areas interlink with each other. Additionally it was discussed how right-wing and Eurosceptic movements exploit this nexus in order to increase the feeling of insecurity among the citizens. Against this backdrop, the participants debated the following main questions:

This first consultation and idea development process was continued at a public Vision Night. The participants were represented by elected rapporteurs who debated the results of the first day and of the #1stYoungCitizens’FutureLab of 27 and 28 September 2018 with an interested audience and with the political scientist and author Claus Leggewie. In his new book “Europa Zuerst” (“Europe First”), Leggewie formulates a declaration of independence for Europe. Following a review of the current political situation in the EU the four rapporteurs and Leggewie discussed the ideas which were developed during the two #YoungCitizens’FutureLabs, e.g. a school subject “Europe” or a European project week, establishment of e-participation tools (following the example of Estonia), a fact checking platform on a European level and couchsurfing opportunities for young citizens who will benefit from the #FreeInterrail initiative.

At the second day of the #2ndYoungCitizens’FutureLab the participants voted for the most crucial topics which then were elaborated on in three working groups. They developed proposals and demands to be addressed to policy makers. The participants opted for “Populist Challenge”, “Future of Europe and EU Institutions” and “Solidarity, Identity and Social Europe” and came to the following results:

Regarding some of the proposals like the introduction of a European week or improved conditions for Interrail there is a broad consensus among the participants of the first two #YoungCitizens’FutureLabs. There was also the tendency that young citizens would like to see a strengthened European identity, a stronger voice of young citizens in actual policy making as well as the removal of language barriers and the development of the EU institutions.

The formulated proposals which were collected so far are further discussed on the platform OPIN which is a web-based e-participation tool that aims at higher youth participation. Participants are currently able to elaborate, discuss and vote on their ideas. After completing the #3rdYoungCitizens’FutureLab in Nice (January 2019) and the #4thYoungCitizens’FutureLab in Warsaw (February 2019) the participants will decide which of the proposals and demands they think are most important. Those will be summarized by the rapporteurs in a Manifesto which is going to be addressed to and discussed with the public and policy-makers in #YoungCitizens’Conventions in May and September 2019.