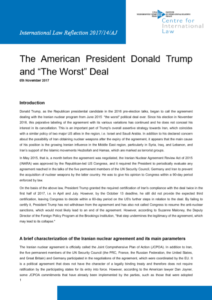 Donald Trump, as the Republican presidential candidate in the 2016 pre-election talks, began to call the agreement dealing with the Iranian nuclear program from June 2015 “the worst” political deal ever. Since his election in November 2016, this pejorative labeling of the agreement with its various variations has continued and he does not conceal his interest in its cancellation. This is an important part of Trump’s overall assertive strategy towards Iran, which coincides with a similar policy of two major US allies in the region, i.e. Israel and Saudi Arabia. In addition to his declared concern about the possibility of Iran obtaining nuclear weapons after the expiry of the agreement, it appears that the main cause of his position is the growing Iranian influence in the Middle East region, particularly in Syria, Iraq, and Lebanon, and Iran’s support of the Islamic movements Hezbollah and Hamas, which are marked as terrorist groups.