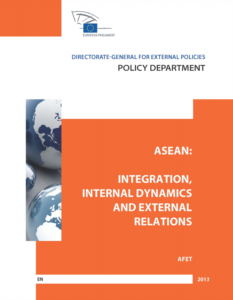 Throughout its evolution, ASEAN has consistently maintained its attachment to the full respect of national sovereignty and the principle of non-interference in internal affairs, which translates into consensual decision-making, political rather than legally-binding agreements and the lack of sanctions for non-compliance. A major breakthrough in terms of institutionalisation came about with the signing of the ASEAN Charter of 2007, which has enhanced ASEAN’s standing as a rule-based organisation and approximated it somewhat to structures typical of the EU. Unfortunately, the persistence of consensual decision-making and non-confrontational habits has slowed down some of ASEAN’s integration projects and hindered the development of a human rights mechanism. Moreover the ASEAN integration project is imperilled by a number of structural factors, currently aggravated by the divisive influence of China in the economic and security field.