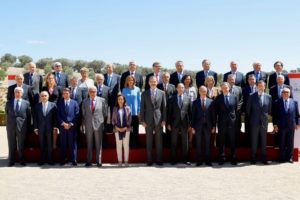 The Elcano Royal Institute celebrated on the 18th June the reunion of its board, under the Presidency of His Majesty Felipe VI, President of Honour of the Elcano Royal Institute, at The Royal Palace. President of the Elcano Royal Institute Emilio Lamo de Espinosa, in the presence of three ex- Presidents of Government as well as ministers and numerous important persons in the world of Business, highlighted the growing presence of the institute on the world stage, as well as its success in building relationships across a network of think-tanks and Universities. Highlighting the Institutes vigorous activity, Mr. Espinosa pointed to the more than 300% increase in events held by the Institute since the last reunion of the board, as well as the establishment in Brussels of a permanent working group dedicated to enhancing Spanish influence in the European Union.