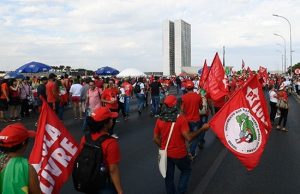 With the former President, Dilma Rousseff, out of office as the result of a polemical impeachment and with Luiz Inacio ‘Lula’ da Silva in prison after having been a priority target of Operação Lava Jato, the electoral future of the Workers’ Party (PT), along with the future of Brazilian politics, remains highly uncertain as the country faces the October presidential elections. Before being disqualified by the courts, Lula led the polls while the current President, Michel Temer, was rejected by more than 80% of Brazilians and unemployment was running at 13%. This suggests that Brazil’s next election will be anything but trivial. Some have even to come to see the upcoming contest as a face-off between ‘civilisation and barbarism’: the traditional parties and candidates on the one hand against the extreme authoritarian right on the other, the latter represented by Jair Bolsonaro, a true anti-democrat. (…)