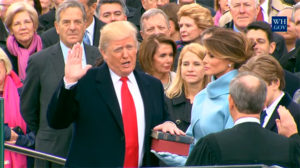 The first 100 days of the Trump Presidency have come to an end.

Donald Trump’s first 100 days as President have been full of high drama and controversy. While the President has attempted to push a number of his campaign proposals onto the domestic agenda, so far there has been no major legislation passed. His most high-profile executive orders are currently blocked in the courts. His Administration’s tone on trade policy has dramatically moderated, and while the rhetoric on foreign policy bounces back and forth between ‘Jacksonian’ and ‘neorealist’, actual diplomacy has played the good cop, bringing the US posture back to something very close to the pre-Trump status quo. But North Korea is threatening war and President Trump might have to celebrate his first 100 days on Saturday after his government shuts down on Friday… unless the President, or his men, broker a deal.