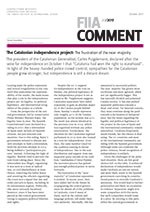 The president of the Catalonian Generalitat, Carles Puigdemont, declared after the vote for independence on October 1 that “Catalonia had won the right to statehood”. In light of the heavy-handed police crowd control, sympathies for the Catalonian people grew stronger, but independence is still a distant dream.