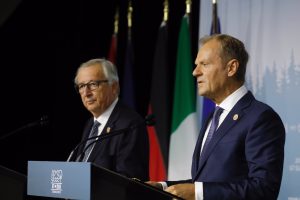 Reflecting in the summer time about the ‘state of the Union’ one cannot but conclude that the European Union finds itself in a difficult position these days.

The challenges are well known. The external ones are essentially connected to the unrest in our direct neighbourhood: Russia-Ukraine, the Middle East, Turkey, Central and Northern Africa. Furthermore, the relationship with the Trump administration is getting more and more troublesome: Trump’s criticism of the EU as an organisation, the US’ withdrawal from the Paris agreement, trade disputes, the US’ withdrawal from the Iran nuclear deal, the cooperation within NATO, to mention a few.

The most important internal problems concern the economic crisis and unemployment; the impact migration has on national and regional societies; populism and Euroscepticism; and rule of law problems in several Member States. Finally, Brexit, like enlargement, can be qualified both as an external and as internal challenge.

Whereas the internal problems affect the stability of the EU cooperation process, the external ones touch upon the status of the EU as a global power.

Looking at Donald Tusk´s Leaders’ Agenda and the negotiations so far about the issues referred to therein, not much progress has been made at the level of Heads of State and Government so far. Basically, all files are still waiting for final decisions.

On the contrary, the Commission has demonstrated to be aware of its responsibility by presenting constructive proposals in all crucial files and by representing the EU in relations with ‘third’ parties in an effective manner. Examples of the former concern the Euro zone reform, migration and the multiannual financial framework. It may be that the Commission’s proposals concerned do not always satisfy the desires of all Member States, but they at least reflect a prudent and balanced approach of the issues in question. Examples of the latter include Brexit (the role of the chief negotiator Michel Barnier) and trade (for example Jean-Claude Juncker’s meeting with US President Trump on 25 July: perhaps not very concrete results have been reached that day, however tensions with the US are at least diminished for a while).

The way the Commission operates properly reflects the mission of that institution as caretaker of the general interest of the EU. On the other hand, the Heads of State and Government focus mainly on national interests during their negotiations, often without being prepared to make compromises. Not surprising perhaps, but still.

Therefore, in order to stimulate new approaches for the problems the EU is faced with, the Commission should be granted more freedom of manoeuvre, especially in the domain of the – earlier mentioned – external challenges: Russia, the Middle East, Turkey, Africa but also the relationship with the US.

To the extent these challenges concern, formally, the EU Common Foreign and Security Policy (CFSP), it should be noticed that their foreign policy and defence dimensions are closely related to other common policies for which the Commission already bears important responsibilities: the EU neighbourhood policy, the common commercial policy and migration.

Apart from that, the High Representative of the Union for Foreign Affairs and Security Policy – one of the Vice-Presidents of the Commission – will certainly be capable to play an appropriate role with regard to all challenges mentioned,  the more so since she is assisted by the European External Action Service and able to profit from the expertise available in the Directorates-General of the Commission.

Certainly, without a mandate of the Council the High Representative cannot take action. And, indeed, practice shows that it is not always easy for the Council to come to agreement in CFSP matters. This is certainly due to the specific CFSP arrangements, unanimity as the decision making modality being one of them. Having said that, it is in the interest of the Council – and of the Member States themselves – to perform better in these areas and to provide adequate mandates timely.

Working that way, the EU can finally start to play the role of a credible Global Actor that is able to have a real impact on serious international discussions and negotiations, on a scene dominated today by the United States, China and Russia.