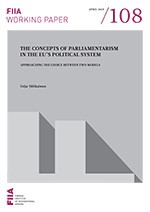 Teija Tiilikainen, The Concepts of parliamentarism in the EU’s political system: Approaching the choice between two models, April 2019

Lack of clarity concerning the contours of parliamentarism tends to support an underestimation of the role it plays at the EU level. The path towards the revision of the Union’s democratic governance along the lines of the separation of powers system is currently shorter than the one provided by parliamentarism as control of the executive.