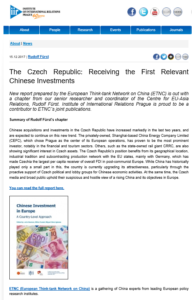 The new report prepared by the European Think-tank Network on China (ETNC) contains a chapter from our senior researcher and coordinator of the Centre for EU-Asia Relations, Rudolf Fürst. The Institute of International Relations Prague is proud to be a contributor to ETNC´s joint publications. Fürst argues that Chinese acquisitions and investments in the Czech Republic have increased markedly in the last two years, and this new trend is expected to continue. The privately-owned, Shanghai-based China Energy Company Limited (CEFC), which chose Prague as the center of its European operations, has proven to be the most prominent Chinese investor in the Czech Republic, and its investments in the financial and tourism sectors were particularly notable. Others, such as the state-owned rail giant CRRC, are also showing a significant interest in Czech assets. The Czech Republic’s position in this respect benefits from its geographical location, industrial tradition and subcontracting production network with the EU states, mainly with Germany, which has made Czechia the largest per capita receiver of overall FDI in post-communist Europe. Please visit the link below to read the full chapter.