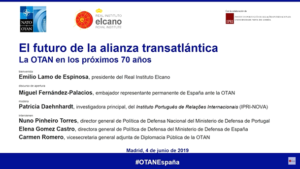 Hosted by President of The Elcano Royal Institute Emilio Lamo de Espinosa this conference to mark the 70-year anniversary of the creation of NATO featured Miguel Fernández-Palacios, Spanish representative to NATO, as its guest speaker. Afterwards there followed a panel discussion, chaired by Senior Researcher of the Portuguese Institute of International Relations Patricia Daenhardt, between representatives of the Spanish and Portuguese Ministries of Defence, as well as Carmen Romero, Deputy Assistant Director-General for Public Diplomacy at NATO.