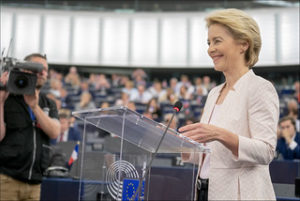 On Tuesday 16 July Ursula von der Leyen was elected by the European Parliament as incoming President of the Commission. The nomination of Von der Leyen was the result of ‘backroom’ politics. She was not a candidate for the position in the first place. The presentation of Von der Leyen in fact was a compromise, reached at a very late stage of the proceedings, in the context of discussions regarding a whole set of nominations. Most probably the majority of heads of state and government didn’t even have a clue who the person they were voting for was!

Also, the ‘wheeling and dealing’ between Von der Leyen and individual groups in the EP was surprising. She negotiated about substantive issues with successive political groups, rather than with the plenary of the Parliament. In her discussions, she made promises and concessions, for example regarding a right of the European Parliament to initiate legislation. In reality, however, the Commission President has no power to get the relevant decisions through, not within the Commission, let alone in the Council or – when treaty amendment is required – in the group of member states.

In that last respect, it must be recalled that the Commission is the initiator in the process to execute the treaty objectives, and a surveyor overseeing that decisions are implemented timely and correctly by the member states. This means that, certainly, the Commission is an important institution, however, it has primarily a serving role.
So, leaving aside whether the European Parliament aims to maintain the approach of Spitzenkandidaten in future, a lot remains to be improved in order to make that procedure successful.

Also, the European Council must reflect on alternative working methods in future cases. For example, once EP elections have taken place, sufficient time should be reserved for a proper debate between heads of state and government to answer the question: who is the person best qualified to fulfil the job of Commission President? In parallel there could be informal consultations, by the President of the European Council with the Presidium of the EP, to pave the way for a smooth continuation of the procedure in the Parliament.

Furthermore, no ‘package deals’ regarding a series of nominations should be aimed at. Rather a bundle of individual decisions must be achieved, each decision focusing on how to best serve the needs of the institution concerned. This time the impression has arisen that the number of nominations agreed upon in the night of 1/2 July was the result of a political ‘horse trading’.

Now, of course, it must be welcomed that the final speech of Von der Leyen on Tuesday 16 July before the plenary session of the Parliament was so well received. The result was a narrow, but positive, vote in favour of her candidature. It may also be that Ursula von der Leyen, as a pro-European politician, will become an excellent Commission President. In fact, let’s hope so, the interests of the EU will only be served with such an outcome.
Meanwhile, we wish Von der Leyen every success needed in her efforts to select the other members of her team, hopefully as dynamic and ambitious as she has proved herself to be during her speech of 16 July.