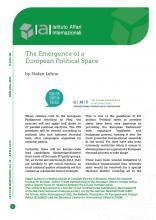 When citizens vote in the European Parliament elections in May, the exercise will yet again boil down to 27 parallel national elections. The 705 members will be elected according to national lists and national electoral laws, after campaigns organised by national parties. Certainly, there will be Europe-wide lead candidates (Spitzenkandidaten) from some of the main EU party groups. Yet, as in the last elections in 2014, they are unlikely to get much traction, as most national parties ultimately see the contest as a domestic trial of strength. This is one of the paradoxes of EU politics.