Antonella Consoli, The Encounter between Democracy and the Internet: European Societies and the Digital Age, IAI Commentaries, 19:53, September 2019. 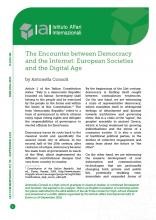 By the beginnings of the 21st century, democracy is finding itself caught between contradictory tendencies. On the one hand, we are witnessing a crisis of representative democracy, which manifests itself in widespread feelings of detachment and distrust towards institutions and governing elites; this is a crisis of the “agora”, the peoples’ assembly in ancient Greece, which is being weakened by growing individualisms and the sirens of a consumer society. It is also a crisis of traditional political parties, in the decline of collective engagement and rising fears about the future or “the other”. On the other hand, we are witnessing the massive development of new information and communication technologies that are profoundly changing both private and public life, potentially enabling new, immediate and expanded forms of popular participation in politics and society. The digital dimension is also influencing political thought, democratising knowledge by making information accessible to everyone.