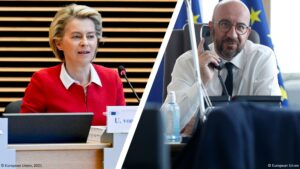 An unfortunate image emerging from the recent visit to Ankara by the President of the European Council and the President of the Commission has given rise to a flurry of comments and polemics. It is a pity that the incident has completely overshadowed the talks themselves, which, according to the accounts by all the participants, were substantial and important.

Rather than dwell on what happened I want to use the opportunity to make a few basic points about the nature of the EU and its external representation at the top level. The EU is a sui generis organization, with a mixture of federal, confederal and intergovernmental elements and a system of checks and balances. The distribution of power and the modalities of representation are therefore not as straightforward as in a nation state.

There is no single President of the EU. There are Presidents of various institutions with a range of legitimacies and powers. The institutions only function and deliver in conjunction with each other. To transform the EU into a strong geopolitical actor you need all the institutions. You also want to find ways of best mobilizing national resources in the pursuit of this objective.

One often hears calls for the EU “to speak with one voice” on the international scene. This is an empty slogan. In a multi-layered governance system like ours there will always be different voices, particularly in the area of foreign policy where Member States retain a high degree of sovereignty. What is key is that the many voices sing in harmony and convey coordinated messages.

The Treaty gives some indications on who represents the EU in meetings with third countries. In CFSP matters, it is the President of the European Council, supported by the High Representative, who not only chairs the Foreign Affairs Council but who also has the advantage of being Vice President of the Commission. The Commission, as an institution, continues to represent the EU in non CFSP areas unless the treaty specifies otherwise.

The Treaty sets the general rules but leaves a margin of appreciation whenever there is a mix of themes to be addressed. In  “How democracies die”, Levitzky and Ziblatt explain why democracies need not only constitutions and rules but also what they call “guardrails” or unwritten rules of behaviour. Apart from “mutual toleration” they list institutional forbearance: avoiding using your legal rights to the hilt and playing “constitutional hardball”. These notions are highly relevant for an organization like the EU, composed of many institutions and 27 Member States. They go well together with the principle of loyal cooperation between institutions and Member that is anchored in the treaties. This is an issue we explored in the latest episode of EuropeChats.

In view of the nature of the EU a dual representation is sometimes inevitable. The question may however be asked whether the incumbents should not find a modus vivendi whereby they agree, at least in cases where there is a clear predominance of either CFSP matters or Community issues, to let one of the two represent the EU, ideally supported by the High Representative who can both talk for the Council and the Commission. They are both members of the European Council which entitles them to talk to Heads of State or government. A good example of such an arrangement was the visit in the name of the EU of President Juncker to President Trump to settle a dispute in trade matters. This was done with the full support of President Tusk and the European Council. In any event, close coordination between the two Presidents and their teams should always happen before such a visit.

This method could also be applied to G7 and G20 meetings where Europeans tend to be over-represented (in quantitative terms, that is). Partners are often irritated because apart from the leaders of the EU Member States that are part of the club the EU is additionally represented by a dual-headed delegation. Having only one of them representing the EU at those meetings would actually make the voice of the EU stronger, not weaker. At the very least, they could agree that for any point on the agenda there is only one of them in the room. I would just recall here en passant  that the way the European countries are scattered over several different constituencies within the IMF is another instance where the failure to reason in terms of maximizing EU clout plays to the detriment of European influence and power.

One interesting instrument that has been used at times in the past and could be used is to delegate tasks not only one or the other of the two Presidents or the High Representative, but also occasionally to other members of the European Council on issues where their countries have particular knowledge, expertise and influence. In the handling of the Ukraine crisis, the EU has thus supported the roles of France and Germany within the Normandy format (with Russia and the Ukraine), working on implementing the Minsk agreements. Before the European Council decides on prolonging the sanctions against Russia, Chancellor Merkel and President Macron report on the situation on the ground (so far alas disappointing). The important point is that whoever is delegated by the EU to represent it speaks with the full weight of the EU and on the basis of an agreed position.

These are just a few thoughts about a sensitive issue and a plea for common sense, tolerance and mutual respect. What counts in the end is the EU’s position on the global scene and the defense of both its interests and values. This can be done within the present Treaty framework. I would warn against false good ideas like merging the posts of President of the European Council and of the Commission. Apart from being unrealistic, this would fundamentally alter the nature of the EU, with far-reaching and potentially damaging consequences. As Einstein once famously said: “For every problem there is a solution that is clear and simple and wrong.”