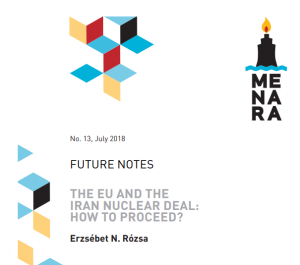 The European Union has played a complementary role to that of the United States over many issues in the Middle East and North Africa (MENA), including the relationship with the Islamic Republic and the Iranian nuclear programme.

The 2015 nuclear deal, which would not have been possible without US support, has so far been the main foreign policy success for the EU. Beyond the deal’s economic and security benefits and the moral obligations involved, therefore, the EU has vital political interests in keeping the deal alive and ensuring it is implemented.

For Iran, the nuclear deal means that it could avoid war and preserve the regime – despite domestic
economic and public concerns – while maintaining its right to use nuclear energy for civilian
purposes, a symbol of modernity and regional power status.

With the deal, the EU and its UN Security Council (UNSC) permanent members (the United Kingdom and France), plus Germany, have been – successfully from the Iranian point of view – distanced from the United States.