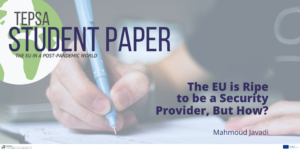 Mahmoud Javadi is a Master’s student and winner of the TEPSA Student Contest 2022. We felt Mahmoud’s paper gave very relevant cross-cutting analysis of security and climate issues, as well as the post-pandemic reality facing our efforts to navigate them. The paper uses case studies well to articulate the arguments made, leading to a set of concrete policy recommendations. 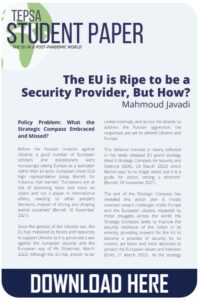 Policy Problem: What the Strategic Compass Embraced and Missed?

Before the Russian invasion against Ukraine, a good number of European scholars and practitioners were increasingly seeing Europe as a spectator rather than an actor. European Union (EU) high representative Josep Borrell, for instance, had warned: “Europeans are at risk of becoming more and more an object and not a player in international affairs, reacting to other people’s decisions, instead of driving and shaping events ourselves” (Borrell, 10 November 2021).

Since the genesis of the Ukraine war, the EU has mobilized its forces and resources to support Ukraine as it is perceived a war against the European security and the European way of life (Stoetman, March 2022). Although the EU has proven to be united internally and across the Atlantic to address the Russian aggression, the responses are set to defend Ukraine and Europe.

This ‘defence’ mindset is clearly reflected in the newly released EU grand strategy titled A Strategic Compass for Security and Defence (EEAS, 24 March 2022) which Borrell says “is no magic wand, but it is a guide for action, setting a direction” (Borrell, 18 November 2021).

The text of the Strategic Compass has revealed this action plan is mostly oriented toward challenges inside Europe and the European citizens impacted by these struggles across the world: the Strategic Compass seeks to improve the security resilience of the Union in its entirety, providing answers for the EU to become a provider of security for its citizens, act faster and more decisively to protect the European values and interests (EEAS, 21 March 2022). As the strategy details how the EU, and its member states will strengthen their security and defence (EEAS, 24 March 2022), it demonstrates how it is less pro-active to the world outside Europe’s borders.

The Strategic Compass has been released as part of an aspiration of a European Union being described as ‘geopolitical power’ and ‘security provider’ in Europe and across the globe. This aspiration requires pro-active agenda that the new strategy has largely failed to cover. This agenda necessitates a modification of the ‘security’ concept in the EU encyclopedia. Security and insecurity do no longer revolve around the conventional definition focusing on militarism. Rather, this concept has recently embraced new broader features in which the non-military threats are become a subject of the security/insecurity.

To exemplify, the Middle East and North Africa (MENA) region has been afflicted by sectarian tensions, armed conflicts, civil war, and aggressions. All these have already had severe impacts on Europe’s societal integrity and security fabric, but the EU has seemingly lacked the willingness, much less the sufficient capabilities, to address the Middle East’s struggles in that region, instead of contending with them once they spill over into Europe.

Hence, historical developments, as well as European words and deeds, suggest talking about the EU’s role as a security provider in the Middle East is null and void. Despite that, the emerging and deteriorating developments in the MENA region signal to EU leaders—particularly those who are in favor of having cohesive security policy such as the Strategic Compass—that providing security in this region means that they will be confronted with new forms of insecurities.

The MENA region has been witnessing critical non-military threats including water, food, and environmental insecurities – all are labeled under the human security. The US administration has recently released a report outlining where and how climate change will threaten security. The report describes the MENA region as “the most water-scarce region in the world” adding “60 percent of the region’s population exposed to high water stress” (The White House, 21 October 2021).

In addition, Florence Gaub and Clémentine Lienard of the European Union Institute for Security Studies has echoed the American assessment and indicated:

“While the MENA region has contributed a mere 3% of total global CO2 emissions over the past century and a half, it will be severely impacted by its effects … [I]n 2019, 13 of the world’s twenty most water-stressed countries were located [in the Arab world]. Climate change alone is not to blame: water mismanagement, too, plays a role, as well as demographic growth” (Gaub and Lienard, 19 November 2021).

In addition to the Arab world, Iran has periodically faced protests over water scarcity; the latest round of brutal protests has unfolded late last year (France 24, 19 November 2021). In the meantime, an scientific paper has cautioned that the Persian Gulf will turn into the saltiest large water area in the world in the near future thanks to the littoral states’ water policies;

Thus, no desalination plant in the Gulf Cooperation Council (GCC) member states will be able to supply drinkable water to their citizens (Ibrahim and Xue and Eltahir, July 2020).

These negative developments, which are the tip of the iceberg in the Middle East and Persian Gulf regions, will result in escalation and internal conflicts in regional states as well as the new flow of climate refugees heading to Europe in the near future. While Europeans are seeking to concentrate more on ‘hard’ insecurities, ‘soft’ insecurities across the Middle East—those not arising from military threats—are about to evolve into critical security challenges for states in the region and beyond, including the EU.

Policy Solutions: How the EU Can be a Security Provider Across the World?

What the EU can and should do is, first, to see such increasing non-military insecurities in the Middle East and elsewhere as part of their future security provider role under the Strategic Compass and, second, bring their decades-long capacities in the norm-setting and rulemaking to the fore aimed at finding collective multi-stakeholder answers to the rising insecurities in the region.

The EU should double its attention to the transnational insecurities in different regions across the world. This will happen if the EU modify its definition and understanding of security and concentrate on the emerging insecurities that put the human lives in peril. This modification will perfectly occur by incorporating it into the Strategic Compass or turn it into a new European agenda.

Along this shift, the EU should utilize the lessons learned from the practice of its civilian powerness to assist the regional states in finding best practices. The EU success in containing COVID19 and being the pharmacy of the world, as the President of the European Commission described it, has augmented its global position, and given the Union a meaningful leverage to expand its norms and values on threats to the human security. In fact, the post-covid world will lay the ground for the EU to impact the regional and global agenda on emerging insecurities.

The EU’s leading role in mediating and consensus-building on shared challenges will also positively contribute to the deteriorating diplomatic ties between countries. Equally important, it will also project a positive image of the EU to the hearts and minds of the people in different regions, who will see the Union as a genuine entity on which their countries can rely in addressing the soft insecurities their region is facing.

As it is called an “action plan,” the Strategic Compass enjoys capacities to address these challenges in the MENA region and elsewhere through norm-setting and partnership with regional states on transnational insecurities. Similarly to how Thomas Friedman recently predicted that the United States could reengage the MENA region through a sort of ecosystem diplomacy (Friedman, 26 October 2021), the EU could and should seize the moment to provide security against non-military threats in the regions, both deepening its influence and avoiding a new wave of (climate) migration to European shores.

Borrell, J. (10 November 2021). “Europe cannot afford to be a bystander in the world. We need a strategic compass”. Blog Post. Retrieved 15 April 2022 from: https://www.eeas.europa.eu/eeas/europe-cannot-afford-be-bystander-world-we-need-%E2%80%9Cstrategic-compass%E2%80%9D_en