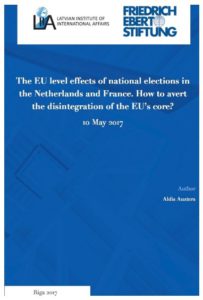 The Netherlands and France, despite their affluence and long-standing democratic traditions, are experiencing a major political shift which manifests in a rapid decline of the established Social Democratic (left) and Christian Democratic (right) parties and rise of anti-European and anti-democratic populist political forces. Although the two countries are not the only ones faced with such political upheaval, the two are part of the EU’s core and, hence, the demise of the established pro-European political forces in the two countries begets questions about the survival of the EU itself.

The book is freely available here