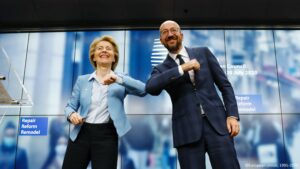 The underlying reason for the discussions in the European Council this month, namely the ongoing casualties and economic damage caused by COVID-19, was a tragic one, and the negotiations were complex and lengthy. From an EU perspective though, the decisions taken by the European Council of 17-21 July regarding the EU Recovery and Resilience Fund (Next Generation EU) as well as the Multiannual Financial Framework (MFF) 2021-2027 can be positively assessed.

Indeed, some remarkable results have been achieved in a relatively short period. To mention the most important:

Therefore, it is not so much the duration or the complexities of the negotiations that count, but the end result.

In that regard the procedure that took place was successful: France (Emmanuel Macron) and Germany (Angela Merkel) paved the way for the Commission (Ursula von der Leyen) to present balanced proposals. In the margin of the European Council sessions, Charles Michel practised a ‘terrace’ diplomacy to bring (groups of) partners closer together. Last but not least, Angela Merkel rendered good services, on behalf of the German Presidency, to bring the negotiations to a successful conclusion. All in all, an example of good cooperation!

Of course, the outcome of the negotiations regarding the Next Generation EU Fund and the new Own Resources Decision must be implemented, to start with by means of concrete Commission proposals. Furthermore, in its Resolution of 23 July, the European Parliament, co-legislator with regard to the MFF, has indicated that the headings and financial levels of the several policy clusters have to be renegotiated. The Parliament must also be formally involved in the decision making regarding the new Own Resources Decision. Moreover, national parliaments are required to approve that Decision.

Whereas these final proceedings may be difficult to complete, the external threat – the painful consequences of Covid 19 – is too important to not come to a timely overall agreement.

If the negotiations have taught us anything, it is that investments in the EU are to be considered investments in ourselves. In that regard the 17-21 July results, once implemented, will contribute to more equality between the economies of the member states. In that sense they serve a better functioning of the internal market.

There is one thing, though, we have to seriously reflect on: the decision making requirements that had to be respected. For example, has time not come to do away with unanimity as the requirement for decision making at the level of the European Union respectively in politically sensitive policy matters? Is such a requirement still tenable in a community of 27 member states? Moreover, is it not astonishing that the European Parliament, formally speaking, has no say over the modalities of the recovery fund? Fortunately in the treaties, a concrete legal basis was available on which to base the decision making regarding the fund: Article 122 TFEU, allowing the Council, on a proposal of the Commission, to take extraordinary measures in situations of crisis, as an expression of solidarity among member states. On the other hand, from the perspective of democracy, it is indicated that the Parliament be given a say in the final outcome of the discussions concerned. In the understanding, of course, that in urgent cases decisions can be made quickly.

Most importantly, however, we may all agree that the 17-21 July results represent an important incentive for the EU integration process as such. The only thing to hope for is that it should not always be a pressing external cause inciting the member states to come to a fast agreement about urgent common issues.