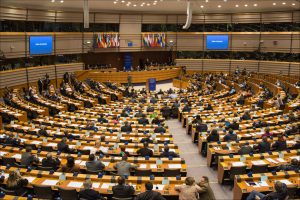 The European elections of 23-26 May take place at a crucial moment in the history of the European Union (EU): Brexit (yes or no?), migration reforms not being agreed upon, strong divergences between the member states regarding economic development and employment, concerns about our internal security, geopolitical tensions at all our external borders, an unpredictable American partner, China exercising economic pressure on our continent and an authoritarian Russia neighbour.

On top of these developments, however related, a growing dissatisfaction emerges with citizens in many member states about politics as such. People complain not being heard or adequately involved in national policy making. From the perspective of the EU, we observe widespread populism, nationalism and Euroscepticism, not only with citizens and political parties in member states, but also with quite a number of governments of member states. Europe ‘bashing’ is one of the favourite instruments practised by populist politicians.

Moreover, democracy, human rights and fundamental freedoms, the rule of law, an independent judiciary and the protection of minority rights are not a given anymore in our Union. In that context, the recent suspension of Fidesz as a member of the EPP Grouping in the European Parliament is a symptom of a wider phenomenon.

So, at the moment the general political environment in the EU is not so favourable, to put it mildly. And, without respect of our fundamental values, the working of the institutions and the functioning of the EU policies generally speaking can be easily undermined.

In order to remedy this situation in the first place, a decent level playing field for in depth and balanced discussions about (the future of) EU cooperation has to be secured. The present momentum –the campaign for the European elections- provides an opportunity to do that.

In an effort to counter populist tendencies, we should not ‘play’, as populists are tempted to do, on the ‘emotions’ of people regarding issues like unemployment or migration, and the responsibility of the Union in that context. Nor should we practise their one-sided ‘one line’ approaches. Rather, we must tell the people the whole story, in a balanced manner: what does EU cooperation imply, how do the institutions work, what can be realistically achieved, what has been accomplished, how is democracy organised at the European level, but also: which are the shortcomings of EU cooperation and what has to be improved?

In the run-up to the European elections, the TEPSA network can play an important role. In the framework of the implementation of our 2019 Europe for Citizens programme ‘discussion events’ and so-called ‘town hall meetings’ are scheduled in several member states. Right after the May elections, on 27 May, a Cross-European Election Debriefing event will be organised in Brussels as well. Excellent!

So much is clear, we must be involved in the campaign for the European elections, as a source of expertise and with a view to inform especially the people, young and old. That means that, when organising events, not only professional colleagues and/or policy makers should be invited, but notably those –the ordinary citizens- who are supposed to cast their vote in May.

Certainly, 2019 may become a fascinating year. On substance, the discussion about the EU Future Agenda will take off during an (informal) meeting of Heads of State and Government on 9 May in Sibiu, Romania. Moreover, as everybody is aware, a series of institutional changes have to be carried through.

However, let’s first make sure that a proper debate can take place, about EU cooperation in general and the European elections in particular. TEPSA can make a prominent and constructive contribution in that regard. For example, to stimulate voters to make use of their right to vote. And, secondly, to enable the people to make real choices on the basis of well-founded opinions.