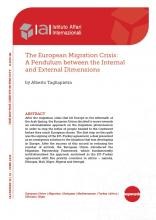 After the migration crisis that hit Europe in the aftermath of the Arab Spring, the European Union decided to move towards an externalisation approach on the migration phenomenon in order to stop the influx of people headed to the Continent before they reach European shores. The first step on this path was the signing of the EU–Turkey agreement, a deal presented as an emergency solution to the situation that was developing in Europe. After the success of this accord in reducing the number of arrivals, the European Union introduced the Migration Partnership Framework, which fundamentally institutionalised the approach enshrined in the EU–Turkey agreement with five priority countries in Africa – namely, Ethiopia, Mali, Niger, Nigeria and Senegal.