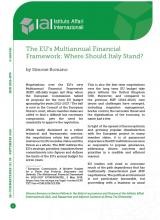 Negotiations over the EU’s new Multiannual Financial Framework (MFF) officially began last May, when the European Commission tabled its proposal for the next EU budget spanning the years 2021-2027. The ball is now in the Council of the European Union’s court, where member states are called to find a difficult but necessary compromise, give the need for unanimity to approve the regulation. While easily dismissed as a rather technical and bureaucratic exercise, the negotiations retain key political relevance for EU member states and the Union as a whole. Many member states have developed structured positions and demands on a number of key issues in the negotiation, but Italy has thus far failed to outline a clear and articulate position.