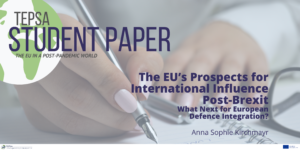 Anna Sophie Kirchmayr is a Masters student and winner of the TEPSA Student Contest 2022. We felt Anna Sophie’s impressive paper provided an extremely well-documented case that European Union defence integration remains “unclear and fraught with internal challenges” in the wake of the United Kingdom’s withdrawal from the EU. 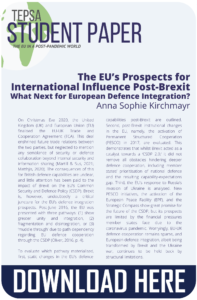 On Christmas Eve 2020, the United Kingdom (UK) and European Union (EU) finalised the EU-UK Trade and Cooperation Agreement (TCA). This deal enshrined future trade relations between the two parties, but neglected to mention any semblance of security or defence collaboration beyond internal security and information sharing (Martill & Sus, 2021; Matthjis, 2020). The consequences of this for British defence capabilities are unclear, and little attention has been paid to the impact of Brexit on the EU’s Common Security and Defence Policy (CSDP). Brexit is, however, undoubtedly a critical juncture for the EU’s defence integration prospects. Post-June 2016, the EU was presented with three pathways: (1) show greater unity and integration, (2) fragmentation and disintegration, or (3) ‘muddle through’ due to path dependency regarding EU defence cooperation through the CSDP (Oliver, 2016, p. 4).

To evaluate which pathway materialised, first, static changes in the EU’s defence capabilities post-Brexit are outlined. Second, post-Brexit institutional changes in the EU, namely, the activation of Permanent Structured Cooperation (PESCO) in 2017, are evaluated. This demonstrates that whilst Brexit acted as a catalyst towards a ‘CSDP 2.0,’ it did not remove all obstacles hindering deeper defence cooperation, including member states’ prioritisation of national defence and the resulting capability-expectations gap. Third, the EU’s response to Russia’s invasion of Ukraine is analysed. New PESCO initiatives, the activation of the European Peace Facility (EPF), and the Strategic Compass show great promise for the future of the CSDP, but its prospects are limited by the financial pressures member states face due to the coronavirus pandemic. Worryingly, EU-UK defence cooperation remains sparse, and European defence integration, albeit being transformed by Brexit and the Ukraine war, continues to be held back by structural limitations.

Brexit meant the loss of a member state with considerable military power. The UK is one of the top five defence spenders in the world, and, alongside France, the UK was the only member state who could conduct full-spectrum military operations abroad (Black et al., 2017, p. 25; Smith, 2019, p. 88). British military equipment, such as minesweepers or unmanned aerial vehicles, are difficult to replace, and French and British forces accounted for forty percent of the EU’s public defence investment (Black et al., 2017, p. 66; Yussupova, 2018, pp. 5–6). Financially, the UK was a net contributor to CSDP operations, and the UK participated in Operation Althea in Bosnia and Herzegovina, Operation Sophia in the Mediterranean, and managed Operation Atalanta’s headquarters in Northwood (Black et al., 2017, pp. 30; 153; Lain & Nouwens, 2017, p. vii). However, the UK’s contributions to the CSDP declined after 2010, after which Atalanta was the only noteworthy British involvement in CSDP operations (Sweeney & Winn, 2020, p. 232). Relative to its significant defence capabilities, the UK became shy to contribute to the CSDP in material terms.

By 2014, the UK ranked fifth for contributing to military and seventh for civilian missions, and in, 2018, British personnel contributions only made up a little over two percent of all other member states’, despite contributing sixteen percent of the budget (Sweeney & Winn, 2020, p. 238; Xavier, 2018, p. 106). This reluctance to commit to the CSDP materially was mirrored in the UK’s institutional character within the CSDP framework. Although it spearheaded the CSDP together with France in the 1990s, the UK had since been labelled a “laggard” (Smith, 2019, p. 88; Whitman, 2016, p. 45). Fearing overlap with the North Atlantic Treaty Organisation’s (NATO) responsibilities, it opposed expanding the European Defence Agency (EDA), increasing its budget, establishing a permanent European headquarters, and activating PESCO through qualitative majority voting in the Council (Deschaux-Dutard, 2019, p. 180; Lain & Nouwens, 2017, pp. viii; 11; Martill & Sus, 2018, p. 12; Whitman, 2016, p. 46; Yussupova, 2018, p. 4). Thus, whilst the EU did suffer a meaningful blow to its structural defence capabilities post-Brexit, it was also freed of an ‘awkward partner’ in the CSDP.

Brexit is one factor among many that pushed the EU and its member states towards greater defence integration in 2016 and 2017. By sheer coincidence, the EU Global Strategy was released the same month as the Brexit referendum was held, and called for greater strategic autonomy, in light of new threats to the EU’s internal and external security, and thus reinvigorated calls for greater European defence integration (European External Action Service, 2016). In September 2016, former Commission President Jean-Claude Juncker’s State of the Union speech revealed that the Commission will propose a European Defence Fund (EDF) and noted the possibility of activating PECO at the upcoming Bratislava summit of the EU 27. This set the stage for the European Defence Action Plan, published in November 2016, which introduced the EDF and outlined the member state-driven Coordinated Annual Review on Defence (CARD). PESCO was activated a year later by the Council (European Commission, 2016; PESCO, n.d.). One must note that the latter is intergovernmental and possesses a somewhat similar character to the EU’s battlegroups, and thus may not have been blocked by the UK (Biscop, 2020, p. 4). Yet, overall, this shift in European defence integration can be attributed to Brexit on two accounts: firstly, as a band-aid to the aforementioned loss of British defence spending in the bloc, and secondly, as the removal of a vocal critic of increased European defence cooperation.

PESCO aptly illustrates this dynamic. The UK’s departure shifted member states’ calculations, first and foremost that of national autonomy weighed against European defence cooperation. Up until late 2017, member states as a whole – regardless of their size and capabilities – were not particularly eager to activate PESCO, which was marred with disputes on participation criteria and decision-making rules. This changed in the immediate aftermath of the Brexit referendum, as illustrated by France and Germany’s newfound leadership of the ‘CSDP 2.0.’ At the end of June 2016, in direct response to outcome of the referendum, German Foreign Minister Frank-Walter Steinmeier and his French counterpart Jean-Marc Ayrault issued a joint policy proposal calling for a European Security Compact, which included the activation of PESCO (Ayrault & Steinmeier, 2016; Reuters Staff, 2016). At the Bratislava summit in September 2016, the two states proposed to develop joint EU military headquarters and joint procurement on expensive equipment, such as drones (Emmott & Siebold, 2016). One must note that Brexit did not drastically alter France and Germany’s positions, and PESCO remained hampered by different strategic cultures among member states, its vague commitments, lack of military capability integration, and member states continuing to procure defence at the national level, ultimately resulting in a sustained capability-expectations gap that has plagued the CSDP since its infancy (Biscop, 2020, p. 9; Lain & Nouwens, 2017, pp. 12; 25; McCarthy, 2018; Whitman, 2016, p. 46; Wilkinson, 2020, p. 7). The first CARD cautioned that Europe’s strategic autonomy still appears miles away, and in this regard, the UK’s financial contributions will be sorely missed (Barigazzi, 2020). Thus, whilst PESCO did become a cornerstone of the CSDP in the immediate aftermath of the Brexit vote, it remained doubtful whether PESCO’s ambitions could be fully realised soon.

On the surface, the EU’s strong and united response to the on-going Ukraine war paints a strikingly different picture to this pessimistic prediction. Days after Russia’s invasion, the EU swiftly adopted a support package under the EPF, which had never been activated before. The Council of the EU agreed to supply four hundred and fifty million Euros worth of lethal equipment and fifty million Euros worth of non-lethal supplies to Ukraine, thus breaking a long-time taboo of EU foreign policy regarding lethal assistance (Lenzu, 2022). PESCO’s Cyber Rapid Response Teams were operationalised for the first time in order to aid Ukraine’s cybersecurity, under the auspices of the EDA (European Defence Agency, 2022). The External Action Service’s new Strategic Compass, which was delayed due to Ukraine’s invasion, reflects the EU’s new-found ambitions towards strategic autonomy and contains bold goals, including “develop[ing] an EU Rapid Deployment Capacity to allow us to quickly deploy up to 5,000 troops for different types of crises” (European External Action Service, 2022, p. 6). The EU has clearly awoken to the “new world of threats” it faces, and responded with unity and a clear sense of direction: at least on paper (European External Action Service, 2022, p. 5).

In a post-pandemic world, this powerful rhetoric may again fall flat. The EU’s new ambitions rely on less financial support due to member states’ earlier responses to COVID-19. Because of the pandemic, the 2021-2027 Multiannual Financial Framework dedicated only eight billion Euros to the EDF, a significant decrease compared to the initially proposed thirteen billion (European Commission, n.d., 2018). Additionally, despite national defence expenditure increasing by five percent across the EU compared to the year prior, in 2020, collaborative European defence spending reached a record low. Only eleven percent of total equipment procurement took place in cooperation with other member states (European Defence Agency, 2021). Moreover, the pandemic exacerbated existing geopolitical tensions between the United States and China, and the EU now finds itself in an increasingly fragmented and polarised international order. On the one hand, these changes may lead member states to be drawn to EU-level defence cooperation, considering their strained national defence budgets and heightened security threats in the neighbourhood (Csernatoni, 2020). On the other, as funding for CSDP projects, such as the EDF, were set in stone before the Ukraine war began, the Strategic Compass’ ambitions may ultimately be difficult or impossible to implement in the short-term.

So, you’ve left the EU… what happens now?

The UK remains hesitant to cooperate with the EU in defence. This can be attributed to the UK wanting to transform into a post-Brexit ‘Global Britain’ that is entirely freed from the shackles of EU rules, including in security and defence; the deteriorating relationship between London and Brussels during the TCA negotiations; and the EU’s hesitance to offer the UK a ‘special’ association agreement (Martill & Sus, 2021). Yet, in the face of the changing security environment in Europe, the UK could change course. It may wish to become an ‘integrated player’ by attending an EU27+1 Foreign Affairs Council or becoming associate member of the CSDP (Black et al., 2017, p. 69; Whitman, 2016, p. 48). There is some precedent for this, as Norway and Turkey have participated in EU Battlegroups and are not EU members (Black et al., 2017, p. 68). However, for the UK to view continued EU defence cooperation as beneficial over, for instance, focusing its attention on NATO, the EU must coax British defence contractors to invest in CSDP projects. Paradoxically, to do so, the EU must continue to prioritise and increase its efforts towards strategic autonomy, yet, these efforts have been challenged by the pandemic (Shea, 2020, pp. 92–93).

Thus, the future of EU defence integration remains unclear and fraught with internal challenges. The CSDP is structurally weakened by the loss of the UK’s military capacity. Congruently, calls for greater defence integration reawakened after 2016, as the UK’s departure meant the removal of an ‘awkward partner’ hindering EU defence cooperation. Ultimately, because Brexit transformed defence cooperation from a taboo to a viable policy broadly supported by member states, the EU’s prospects for international influence in this field were strengthened in the long-term, despite the CSDP’s intrinsic problems remaining a challenge. This ‘CSDP 2.0’ has been since tested by Russia’s invasion of Ukraine, and the activation of the EPF and PESCO’s Cyber Rapid Response Teams, alongside the ambitious goals of the Strategic Compass, indicate the promising potential of EU defence cooperation, particularly regarding hybrid and cyber warfare. However, member states’ reallocation of funding due to the pandemic may hinder the implementation of these plans. Additionally, the UK’s continued hesitancy to cooperate in defence will harm both parties in the long-term. Worst of all, it issues a damning message to Brussels: now that we have left, we shall never, ever return.

Martill, B., & Sus, M. (2021, December 20). Defence and security: Why is there no UK-EU agreement? UK in a Changing Europe. https://ukandeu.ac.uk/defence-and-security-uk-eu-treaty/

Oliver, T. (2016). What impact would a Brexit have on the EU? Dahrendorf Forum. https://www.stiftung-mercator.de/media/downloads/3_Publikationen/Dahrendorf_Policy_Brief_Dahrendorf-Analysis_Brexit_Tim_Oliver.pdf

Xavier, A. I. (2018). The impact on Brexit on security and defence multilateralism: More cooperation or overlapping interests? Marmara Journal of European Studies, 26(1), 18.