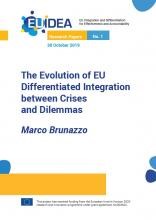 This paper analyses the debate about differentiated integration (DI) from the beginning of the European Union integration process to the 2016 referendum on the withdrawal of the United Kingdom from the EU. This debate can be divided in three different periods, according to the main dilemmas that policymakers tried to address: (i) a political dilemma about the final “destination” of the EU integration project between the 1950s and the 1980s; (ii) a legal dilemma about the mechanism to adopt to promote DI in the 1980s and the 1990s; and (iii) an institutional dilemma about the growing complexity of EU institutions, begun in the 2000s and encapsulated in the Lisbon Treaty (2007). As the paper shows, every period of debate coincided with a specific type of crisis – respectively, a “crisis of design”, a crisis of (foreseen) enlargement and a crisis of economic adaptation.