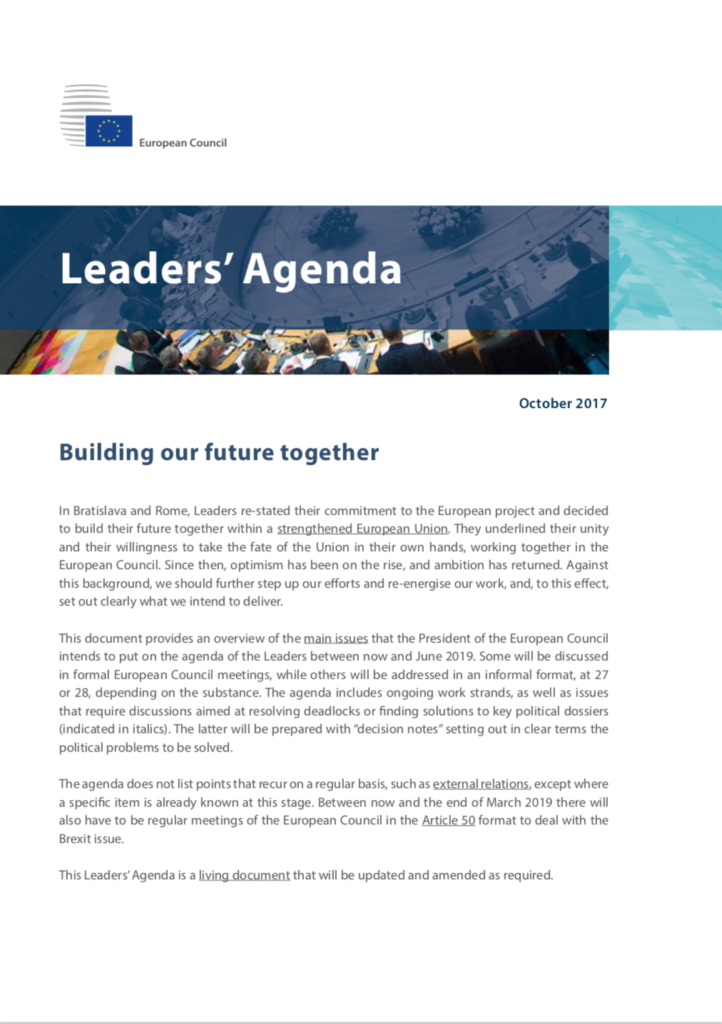 2018 will be a crucial year for the implementation of Donald Tusk’s Leaders’ Agenda.

Fundamental issues are on the agenda, such as migration, social Europe, EMU and the Banking Union, foreign policy and defence, internal security as well as trade.

Certainly, one should recognise that all of the issues mentioned touch upon the roots of national societies and sovereignty. All of them therefore concern, from the perspective of the Member States, politically highly sensitive subject matters.

On the other hand, one should realise that there is a logic why these issues have appeared on the agenda. All of them namely reflect the result of the gradual but steady progress of the European integration process over the decades. That process is a dynamic one and is still in development.

So, in the negotiations about the Leaders’ Agenda, national political leaders should not argue that all issues essentially belong to the national sphere of competence and will be better served when they remain in the national sphere of interest. In its turn ‘Brussels’ cannot claim either that the issues at hand are in future better off when decided upon and managed primarily at the EU level.

In fact, regarding all topics mentioned, a careful ‘balancing’ is required. In this respect it looks as if subject matters like asylum and illegal migration by their nature can better be dealt with at EU level. The same is true for foreign policy and trade. On the contrary, with regard to social policy an intensive coordination of national policies might suffice. And, there are other issues, such as legal migration, the Eurozone reform and internal security, where dividing lines may be drawn between national and EU responsibilities.

On 11 December 2017 the Council decided to establish a permanent structured defence cooperation (PESCO) in which 25 out of the 28 Member States will participate. Is that an adequate approach? One may have doubts here in view of the fact, for example, that unanimity -between the 25- is still the determining decision-making modality when it comes to policy making. Furthermore, like is the case with the Eurozone cooperation, the PESCO decision enlarges the scope for differentiated cooperation. Is it a precedent to be applied in other policy domains as well?

Anyway, what is highly needed in the ‘Future of Europe’ debate is a prudent and careful assessment of the nature and content of each individual topic. This in order to determine at what level they can better be dealt with in future, the national or the European one, or, in particular circumstances, at both levels. To that extent the whole discussion is, at least partially, a subsidiarity debate. What is also of crucial importance is a wise and effective leadership of the negotiations, by Donald Tusk himself. In case the discussions will ultimately fail, the EU will suffer tremendous damage, not only internally but also in the international arena. The EU may easily be marginalised as a global player.

Of crucial importance in this whole discussion is that the unity, consistency and continuity of what has already been achieved at the EU level will be safeguarded. On top of that the outcome of the Future discussion should allow the EU to have a concrete perspective for its further development.

In all this we obviously must not lose the support of the citizens. However, it can easily be that our citizens, if correctly informed, would accept ‘more Europe’ in most of the policy domains mentioned. The communication with the citizens reflects a primary responsibility of national politicians. That is to say, of the Heads of State and Government –so, the members of the institution of which Donald Tusk is the permanent President- in the first place.