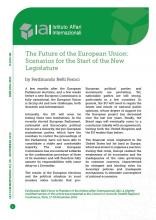 Ferdinando Nelli Feroci, The Future of the European Union: Scenarios for the Start of the New Legislature, IAI Commentaries, 19:65, IAI, November 2019.

A few months after the European Parliament elections, and a few weeks before a new European Commission is fully operational, the European Union is facing old and new challenges, both domestic and international. Internally, the EU will soon be testing these new institutions. In the recently elected European Parliament, nationalist and Eurosceptic political forces are a minority, but pro-European mainstream parties, which have the numbers to control the proceedings of the Parliament, have not been able to consolidate a stable and comfortable majority. The new European Commission has encountered setbacks in the confirmation procedure of three of its members and will therefore fully assume its responsibilities with some delay on 1 December. The results of the European elections and the political situation in most member states indicate that pro-European political parties and movements are prevailing. Yet, nationalist parties are still strong, particularly in a few countries. In general, the EU will need to regain the hearts and minds of national public opinions, whose degree of support for the European project has decreased over the last few years. Finally, the Brexit saga will eventually come to a conclusion (ideally with an agreement), leaving both the United Kingdom and the EU weaker than before.