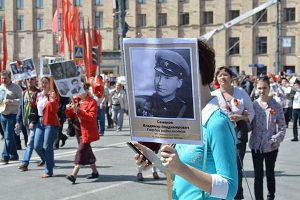 The March of the Immortal Regime is a performance, a massive parade that has been celebrated in major cities both inside and outside Russia every 9 May (Victory Day, the Russian equivalent of VE day, which is 8 May in other countries) since 2012. The participants carry placards with black and white photographs of women and men who died or were wounded in the Second World War. The photographs are accompanied by flowers, Russian flags and even the old red Soviet flag with the hammer and sickle. In the front line of the procession a group of people carry an enormous banner with the following words: Bessmertniy Polk (‘The Immortal Regiment’).

The main aim of this paper is to: (1) analyse the narratives and messages used to shape the Immortal Regiment; and (2) define its principle political objectives and functions in Russia, the ex-Republics of the USSR and in the Western countries.

In Russia the March’s principal political objectives are: (1) to reinvent the historical memory of the Great Patriotic War (the name by which The Second World War is known to the Russians); (2) to redefine Russia’s national identity in the post-Imperial and post-Soviet era; and (3) to promote national unity by invoking patriotism, great-power status for Russia and national pride.

In the former Republics of the USSR, the March is the Kremlin’s response to their disconnection from Russia and a tool to strengthen the Russky Mir (‘the Russian world’). In Ukraine it plays a particular role as the people’s preparation for war and to justify the ‘fight against fascism’, the annexation of Crimea and Russian support for the rebels in Donbas.

In the West, the Immortal Regiment reflects the attempt of the Kremlin to monopolise the victory over fascism and to present itself as a great power and guardian of international order.