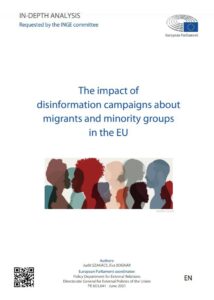 This analysis aims to explore the impact of disinformation activity originated or amplified from abroad targeting minorities in the EU over the years 2018-2021. While disinformation has become all-pervasive, it can be considered as yet another tool being used to target vulnerable groups in society. Looking at recent disinformation campaigns that ethnic, religious and cultural minorities have been subjected to, this study finds both direct and indirect links between disinformation and fundamental rights, such as human dignity or physical and mental integrity, along with core European values, including equality, the rule of law and solidarity. The Roma are found to be victims of domestic disinformation, while migrants and the Jewish community are targeted by the Kremlin. The research found that disinformation by foreign and domestic actors as well as disinformation and organic content are increasingly merging, rendering measures to stop foreign disinformation more difficult.