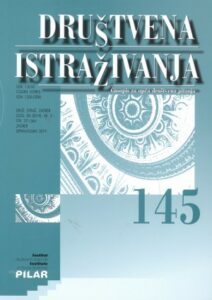 The Društvena Istraživanja journal published a paper by assoc. prof. dr. Ana Bojinović Fenko (CIR) and Albina Osrečki (Ministry of the Interior, Republic of Croatia), titled ‘The (In)Coherence of the EU’s Mediterranean Policies: Analysing the Effects on Implementation Success’. In the article, the authors examine whether the implementation of the EU’s Mediterranean policies has been unsuccessful due to the incoherence of these policies. Termed as incompatibility of goals among the EMP, the ENP and the UFM, incoherence is analysed in various subfields of the EU’s external action, namely in the functional external dimensions of internal policies (Justice and Home Affairs/JHA, Energy, Transport, Environment and Education) and external relations (Trade) on one side, and in Foreign Policy on the other. Functional subfields prove to retain more coherence and higher implementation success, with Education being exemplary. Conversely, political subfields (democratization and respect for human rights) expose incoherence and consequently about 50% failure of implementation. Nevertheless, in JHA (the fight against irregular immigration and terrorism), where the former functional cooperation became highly politically burdened, results show even higher non-implementation, which bears more general relevance for EU external action policy-making.

The paper is freely available here.