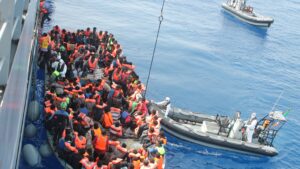 The Commission submitted on 23 September her long awaited ‘package’ regarding the New Pact on Migration and Asylum: an explanatory Communication and nine draft legislative measures.

The migration and asylum file is one of the ‘hot potatoes’ of the EU. It is about third country nationals coming to the EU as a safe and prosperous area, either to be granted international protection or, simply, to look for a better future. With all its consequences with regard to income for those people, housing, food, education, social and medical care, etc.

Migration and asylum are policy areas shared by all Member States and for which common solutions must be found. The problems encountered over the years are directly connected with the principle of free movement of persons, allowing people to cross internal borders in the EU without being controlled. Free movement in the EU thus necessarily requires the establishment of compensatory measures at the external borders.

All the Commission’s proposals are well thought through. Content-wise they are pragmatic and flexible. Equally important is that no Member State can feel offended because of positions taken earlier in the negotiations about this file.

In terms of content the Commission is correct when arguing that most migrants arriving in the EU will not qualify for international protection. So, in principle they have to be returned, one way or the other. That means that there is a need for a (fast) pre-entry screening procedure, whereby migrants who do not qualify for protection can be selected. At the same time an adequate return mechanism, with a central coordinating role for a Brussels coordinator (and the European Border and Coast Guard), has to be put in place.

On the contrary, other migrants presenting an application must be treated according to humane and fair procedures. However, in order to be effective such procedures, apart from being uniform, should not last too long. That means that deadlines have to be set, and enforced.

Furthermore, it is logical that the Member State of first entry is in principle considered the Member State responsible for the examination of applications for international protection. Exceptions being cases where a connection with another Member State can be determined: family relations, an earlier residence permit, an education followed in a Member State, etc.

On the other hand, if the Member State of first entrance experiences ‘pressure’ – for example when many migrants present themselves – solidarity has to be demonstrated, and assistance provided, by the other Member States. In that regard it is an original – and smart – idea to offer the other Member States a choice: they either can accept the format of relocation, accept a so-called return sponsorship or provide operational assistance with other means (by sending immigration officers, creating an infrastructure, providing shelter, funding or other types of contribution). In the interest of a smooth implementation of these arrangements, the Commission proposes that it takes on a coordinating role itself.

Member States can thus choose the option that suits them best. However, in the absence of an adequate ‘solidarity’ offer, according to the proposals the Commission can impose a ‘fair’ contribution (a relocation quota for instance) on the Member State in question. So, ultimately a compulsory element is at stake here.

All in all, the proposals reflect arrangements inspired by the principles of solidarity and responsibility. Moreover, for good reason a central coordinating role for the Commission has been foreseen in crucial stages.

It may be that the concepts proposed by the Commission look at first sight rather technical and theoretical. After reflection though, one must admit that they are realistic and suitable to serve as the common solutions we have been looking forward to for so long. In that respect, one cannot but expect that our Home Affairs ministers will come to the same conclusion.

The proposals of 23 September deserve therefore to be adopted, by the Council and the European Parliament jointly. In view of the file’s urgency, it is indicated that such a result can even be achieved within a reasonably short period of time.