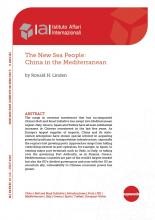 The surge in overseas investment that has accompanied China’s Belt and Road Initiative has swept into Mediterranean region. Italy, Greece, Spain and Turkey have all seen substantial increases in Chinese investment in the last five years. As Europe’s largest supplier of imports, China and its state-owned enterprises have shown special interest in acquiring powerful positions in transportation infrastructure, especially the region’s fast growing ports. Approaches range from taking controlling interest in port operators, for example, in Spain, to owning major port terminals such as Vado, in Italy, or taking over the governing Port Authority, as in Piraeus, Greece. Mediterranean countries are part of the world’s largest market but also the EU’s divided governance and now with the US an uncertain ally, vulnerability to Chinese economic power has grown.