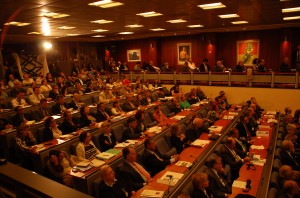 TEPSA and Greek Centre of European Studies and Research (EKEME) organised a Pre-Presedency Conference in Athens in the premises of the Ministry of Foreign Affairs of Greece between 10 and 11 October 2013. Among the speakers were: Maria Damanaki, Member of the European Commission, Εvangelos Venizelos, Deputy Prime Minister & Minister of Foreign Affairs, Theodoros Sotiropoulos, Ambassador, Permanent Representative of Greece to the EU and Panos Carvounis, Head of the Representation of the European Commission in Greece. The conference dealt with the following issues: Greek presidency priorities, new economic and institutional reality, politics facing new realities, EU in the world, the EU and the quest for energy security, the EU and its citizens: the impact of the crisis.

The conferences was preceded by TEPSA General Assembly, where a new Board, which will start its term with the beginning of January 2014, was elected.

The recommendations and the final programme can be found here.