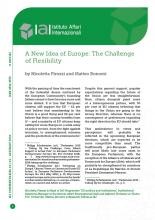 With the passing of time the enactment of the federalist dream nurtured by the European Community’s founding fathers seems to have become more and more distant. It is true that European citizens still support the EU – 62 per cent believe that membership in the Union is a good thing and 68 per cent believe that their country benefits from it – and a majority of EU citizens keep calling for more Europe in a wide array of policy sectors, from the fight against terrorism, to unemployment schemes and the protection of the environment.

Despite this general support, popular expectations regarding the future of the Union are less straightforward. Here, citizen demands paint more of a heterogeneous picture, with 50 per cent of EU citizens believing that things in the Union are going in the wrong direction, whereas there is no convergence of preferences regarding the right direction the EU should take.