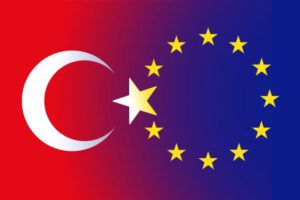 In this research paper, Ágota Dávid and Tamás Szigetvári analyse the benefits of cooperation between the European Union and Turkey in the fields of science, innovation and technology.

They point out that Turkish economy has shown remarkable economic performance over the last decade. Currently, it is the 18th largest economy in the world. To increase its competitiveness and avoid the ‘middle-icome trap’, Turkey set research and development as a priority area for the next decade, with the ambitious goal of reaching 3% of GERD/GDP by 2023. Despite several controversies about the EU accession process in general, the EU is still the best partner for Turkey to reach these goals. Turkey is an active member of the European research area. It is an associated member of the RDI Framework Programmes since 2002, it participated in and coordinated various scientific projects, policy-coordination actions, mobility programmes and won grants for excellent researchers. In the Turkish national STI strategy the three vertical and six horizontal axes consist of various scientific areas like ICT, Energy, Defence, Water, Food, which have been also set as priority areas in the European H2020 programme. We would like to focus in our article on possible synergies between priority areas, as well as on the role of SMEs in the innovation chain, which are enjoying a special attention in both Horizon 2020 and in Turkish national science, economic and innovation policy.