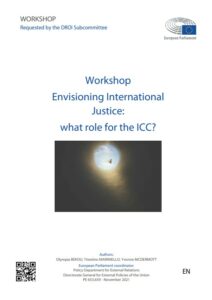 TEPSA has coordinated a study requested by DROI Subcommittee of the European Parliament. The study was authored by Triestino Mariniello, a Senior Lecturer in Law at Liverpool John Moores University, and Yvonne McDermott, a Professor of Law at Swansea University. The study is entitled “The Role of the ICC Since its Foundation and Possible Scenarios for the Future: Case Selection and Prioritisation”.

Since the International Criminal Court (ICC) was established in 1998, its Office of the Prosecutor (OTP) has grappled with decisions on where to channel its scarce resources. Early signs indicate that the new Prosecutor, who took office in 2021 for a nine-year tenure, looks likely to: reduce the number of situations under preliminary examination; prioritise ‘positive complementarity’ through supporting national authorities to investigate and prosecute cases; close, de-prioritise, or ‘hibernate’ ongoing investigations (or particular aspects thereof); and focus on cases which are considered to have the highest likelihood of conviction. These decisions may impact the Court’s perceived credibility and legitimacy. The European Union (EU) should continue to act as a strong defender of the Court’s mandate, by providing ongoing financial support for outreach activities and civil society organisations actively engaged in the fight against impunity. It should persist with encouraging Member States as well as third countries to ratify and fully implement the ICC Statute, inter alia through providing support and training which will enable these countries to pursue domestic prosecutions of international crimes.