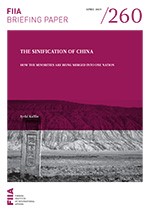 Jyrki Kallio, The Sinification of China: How the minorities are being merged into one nation, 04 2019

The long-term aim of the Communist Party is to make China unified, and the most recent tool for this is the creation a Chinese nation. This term was included in the Constitution last year, which contradicts the definition of China as a multi-national state.

Unifying China includes promoting a Chinese identity through history and culture. The current borders and ethnic composition of China are presented as the results of natural processes. History is written from the viewpoint of the Han Chinese and their relations with the border regions. Culture is discussed in a similar Han-centric manner.

The Party has set “Chinese values” against “universal values” and religions. It demands religions to be Sinified in order to alleviate any risks they might pose to national unity.

Most concretely, the creation of a Chinese nation is affecting the people in Xinjiang. This has given rise to concerns in other countries. The Sinification of minority nationalities may potentially become a new stumbling block in China’s relations with Western states.