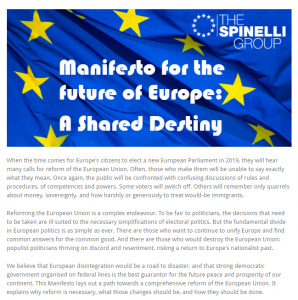 The Spinelli Group, a pro-European grouping of MEPs and politicians pushing for a federalist EU, just published their Manifesto for the Future of Europe.

Check what Andrew Duff, Preisident of the Spinelli Group, says about it in the following Euractiv article.

“When the time comes for Europe’s citizens to elect a new European Parliament in 2019, they will hear many calls for reform of the European Union. Often, those who make them will be unable to say exactly what they mean. Once again, the public will be confronted with confusing discussions of rules and procedures, of competences and powers. Some voters will switch off. Others will remember only quarrels about money, sovereignty, and how harshly or generously to treat would-be immigrants” (…)”.