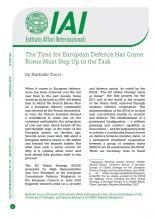 When it comes to European defence, more has been achieved over the last year than in the past decade. Some would go as far back as 1950, the fateful year in which the French Pleven Plan on a European defence community was rejected by the French themselves. In turn, the Union’s founders devised a roundabout to make war on the continent unthinkable: the integration of coal and steel, which kicked off the functionalist logic at the heart of the European project six decades ago. Seventy-seven years later, talk about a European defence union is rife within and beyond the Brussels bubble. But what does such a union consist of? Why is it coming about now? And how should Italy position itself in this process?