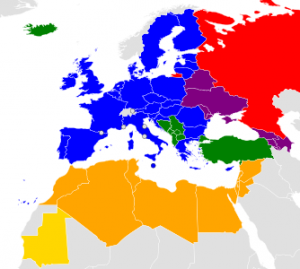 The human tragedies taking place in the Mediterranean shock the world. Recently new forms of barbarism, where immigrants were kept imprisoned in non-seaworthy boats and drowned after capsizing, came to light. Immediate reactions and actions are expected, more particularly from the European Union.

EU Ministers of Foreign and Home Affairs have adopted a ten-point plan in their meeting of 20 April. This plan has been confirmed at a special meeting of the European Council on Thursday 23 April. One of the agreed measures relates to cooperation with third countries, in particular Libya, where many people trying to flee to Europe often start their travel.

When referring to cooperation with third countries, the question arises whether explicit mention should not be made more generally, of the European Neighbourhood Policy (ENP). Indeed, ENP covers all states surrounding the Mediterranean (and Eastern Europe). In this case, however, the reference obviously is to the ENP countries of the Mediterranean: Morocco, Algeria, Tunisia, Egypt, Libya, Syria, Jordan, Lebanon, Israel and Palestine.

The EU has for a long time – itself being preoccupied by the economic crisis – somewhat neglected its relations with the Mediterranean countries concerned, several of them being former colonies of Member States. For a long time we have underestimated the relevance of good relations with that neighbourhood for our own stability and security.

Now, measures to cope with the influx of immigrants coming from Africa (and Asia) could be integrated in a comprehensive and integral policy regarding these Mediterranean ENP countries. Here we may think – in the first place – of rescue operations and measures to combat international crime (human trafficking, corruption, fraud, blackmail and the like), but also of measures how to prevent people to leave their homes, region and country (by rendering assistance in the process of reconstruction after conflict, other forms of development aid, making of investments and the like). Neighbourhood countries may also help by creating ‘safe havens’ on their own territory, where immigrants can submit their applications for asylum or, in the case in question, a residence permit, meanwhile profiting from protection provided by the host country.

Of course we must realize that nearly all Mediterranean countries involved suffer from the consequences of the Arab Spring, now better to be referred to as an Arab Winter. Indeed, many of those countries are politically unstable and find themselves in a vehement process of transformation. However, after a long period of neglect they anyhow require more attention from our side that has happened in the past.

So, there are enough reasons to integrate a discussion and, more importantly, concrete actions on – how to cope with the tragedies in the Mediterranean and the underlying problems in the countries of origin – in the broader context of the EU Neighbourhood Policy. In that framework all sorts of relevant measures may be discussed and adopted in a comprehensive manner: on the one hand assistance for a better system of governance/democracy and trade arrangements/privileges for the ENP countries concerned, on the other hand common actions to combat human trafficking and other forms of international crime.

An adequate implementation of all intentions mentioned will not only provide useful contributions to solve the tragedies at stake, they will also serve our own interests: safety and security in Europe. Furthermore such a more active approach can revitalize a policy domain – ENP – which was only modestly developed during the last couple of years. Last but not least, it will position the European Union as a credible global player in that other part of the world, our neighbourhood.

It is up to the Commission to take first steps in this area. There is no time to lose.