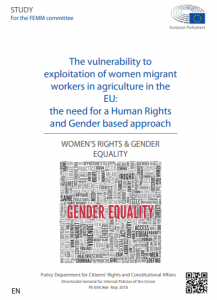 The study aims to explore, through a qualitative approach, the conditions characterising migrant women’s employment in EU rural areas and on farms, focusing on the analysis of some case studies in Italy and Spain. By considering exploitation as a continuum ranging from relatively less severe forms of exploitation up to slavery or trafficking, this report takes into account a wide spectrum of forms of exploitation, within which cases of severe abuse and trafficking can take place.

In doing so, the study aims to illustrate the structural and situational factors that make women vulnerable to exploitation, paying particular attention to the gendered dynamics and power relations. It also critically examines relevant EU legislation and policies concerning THB and exploitation, taking into account related EU migration policies. Italy and Spain have been selected as case studies as they are the two EU countries with the greatest number of migrant workers in the agricultural sector, with a significant presence of migrant women.

Moreover, it has been claimed that race- and gender-based labour market segmentation is especially prevalent in Southern European countries, and that Italy and Spain present specific similarities and differences with respect to the forms of exploitation experienced by migrant women agricultural production.

The full study is available here.