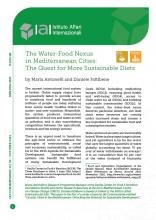 The Mediterranean region presently boasts one of the highest rates of urban population growth in the world and suffers from severe water scarcity. During the 20th century, the region experienced a fourfold increase of urban dwellers and by 2050, 535 million people are projected to live in Mediterranean cities, equivalent to a 51 per cent increase in less than 40 years if one considered the figure of 350 million from 2015. The region also faces multiple food related challenges due to population growth, dietary shifts and the impact of climate change. Mediterranean states suffer from the largest water deficit in the world and face a severe ecological deficit as they consume more than twice the amount of natural resources and ecological services than their ecosystems can provide.