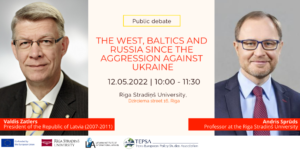 Since the start of Russia’s war of aggression in Ukraine, European states have been engaged in a struggle to provide adequate assistance to the people and armed forces of Ukraine. Recently, Latvian Foreign Minister Edgars Rinkēvičs has encouraged Western allies to train Ukrainian forces on advanced Western weapons. As a Baltic state bordering Russia, Latvia’s response to the war in Ukraine may define its stance towards Russia for years to come.

The Latvian Institute of International Affairs in co-operation with Trans European Policy Studies Association (TEPSA) and Riga Stradins University invites you to the public debate  “The West, Baltics and Russia since the Aggression against Ukraine” between the former president of the Republic of Latvia Valdis Zatlers and the professor of the Riga Stradins University Andris Sprūds. The debate will take place at Riga Stradins University, Dzirciema street 16, Riga (Auditorium 1), on May 12, from 10:00–11:30.

Valdis Zatlers served as the seventh President of the Latvia between 2007 and 2011. During his time in office he acted against corruption in the Latvian system, with the aim to curb the influence of oligarchs. He also met with then-Prime Minister of Russia Vladimir Putin during a state visit. In the context of Russian aggression in the eastern neighbourhood, his expertise will be welcome at this debate.

Prof. Dr. Sc. Pol. Andris Sprūds is Dean of the Faculty of European Studies at Riga Stradins University, and teaches in the Department of Political Science. He is a leading expert on international relations and political science with a focus on the Baltic States and relations with the US and Russia. He is also the TEPSA Delegate for the Latvian Institute of International Affairs.

“The West, Baltics and Russia since the Aggression against Ukraine” will analyse relations in the context of Russia’s war of aggression in Ukraine, and of TEPSA’s upcoming book “EU-Russia Relations and the Future of Europe: Views from the Capitals”, published by Springer and edited by Michael Kaeding, Johannes Pollak, and Paul Schmidt.