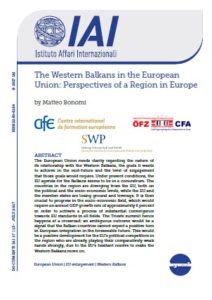 This research paper by Matteo Bonomi derives from the Reflection Forum on the run-up to the Summit of Trieste on the Western Balkans held in Trieste on 26-27 June 2017 organised by CIFE, IAI and CFA.

The author claims that the European Union needs clarity regarding the nature of its relationship with the Western Balkans, the goals it wants to achieve in the mid-future and the level of engagement that those goals would require. Under present conditions, the EU agenda for the Balkans seems to be in a conundrum. The countries in the region are diverging from the EU, both on the political and the socio-economic levels, while the EU and the member states are losing ground and leverage. It is then crucial to progress in the socio-economic field, which would require an annual GDP growth rate of approximately 6 percent in order to activate a process of substantial convergence towards EU standards in all fields. The Trieste summit hence happens at a crossroad; an ambiguous outcome would be a signal that the Balkan countries cannot expect a positive turn in European integration in the foreseeable future. This would be a positive development for the EU’s political competitors in the region who are already playing their comparatively weak hands strongly, due to the EU’s hesitant resolve to make the Western Balkans move on.