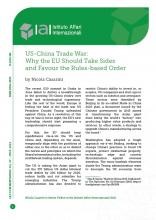 The recent G20 summit in Osaka in June failed to deliver a breakthrough in the growing US-China rivalry over trade and technological supremacy. Like the rest of the world, Europe is feeling the heat of the trade war US President Donald Trump unleashed against China. As a resolution of this tug-of-war is not in sight, the EU’s new leadership should start preparing a comprehensive response. For this, the EU should keep equidistance vis-à-vis the US and China and, depending on the issue, temporarily align with the positions of either one or the other so as to defend the norms and principles on which the liberal international order, including the multilateral trading system, depends.