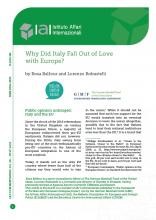 Since the shock of the 2016 referendum in the United Kingdom on leaving the European Union, a majority of Europeans rediscovered their pro-EU sentiments. Italians did not, however. During the 2010s, Italy swung from being one of the most enthusiastically pro-EU countries in the history of European integration to one of the most sceptical. Today, it stands out as the only EU country where fewer than half of the citizens say they would vote to stay in the union. While it should not be assumed that such low support for the EU would translate into an eventual decision to leave the union altogether, possibly due to the fact that Italians tend to trust their national institutions even less than the EU, it is a trend that requires urgent attention.