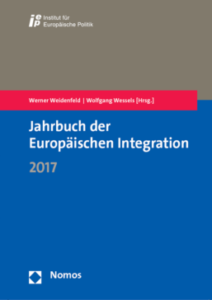 The debates on the future of Europe were given a new impetus in 2017 after a majority of British voters decided in June 2016 to withdraw from the EU. The Brexit vote marks not only a turning point in the history of European integration, but also poses fateful questions to the remaining EU-27: Which Europe and how much Europe do we want? What concessions are we prepared to make for it? The Yearbook of European Integration published by the Institute for European Politics (IEP) in Berlin documents and balances the European integration process from 1980 to the present. The result of 37 years of continuous work is a uniquely comprehensive account of European contemporary history. The “Yearbook of European Integration 2017” continues that tradition. In the contents of about 100 articles the authors trace developments in European politics in their field of research priority in the reporting period 2016/17. They supply information on the work of the EU institutions, the developments of different policy areas in the EU, Europe’s role in global politics and the member and candidate states’ European policy.