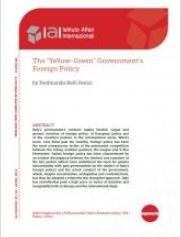 Italy’s government’s contract makes limited, vague and generic mention of foreign policy, of European policy and of the country’s posture in the international arena. What’s more, over these past ten months, foreign policy has been the most conspicuous victim of the permanent competition between the ruling coalition partners, the League and 5-Star Movement. Italian foreign policy has been characterised by an evident discrepancy between the rhetoric and narrative of the two parties (which have underlined the need for greater discontinuity with past governments on the subject of Italy’s foreign policy) and the actual conduct of the government, which, despite uncertainties, ambiguities and contradictions, has thus far adopted a relatively less disruptive approach. Italy has nevertheless paid a high price in terms of isolation and marginality both in Europe and the international stage.