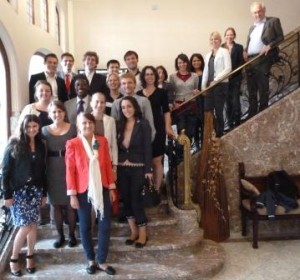 Between the 2 and 6 July 2012 TEPSA and the University of Cologne co-organised the THESEUS Seminar for Young Leaders on “The Future of EU Economic Governance” at the Fondation Universitaire. The THESEUS Seminar for Young Leaders aims to promote interdisciplinary and international networks among a new generation of Europeans. This year 18 excellent young professionals and researchers participated at the International Summer School which was followed by a two day European Council Simulation Exercise.

The participants had been accorded their role in the Simulation Exercise already two month before the actual Summer School and had to draft position papers of their delegations. The organisation team paid great attention to the fact that participants did not represent the country of their real origin.

During the Summer School the participants were offered a broad range of information on EU Economic Governance.

As in previous years the Seminar featured prominent speakers from international organisations, politics, as well as high-level academics to provide an in depth knowledge on the main topics dealt with in academia as well as on the practitioner’s perspective.

The first panels aimed at giving a general introduction to the broader framework of Economic Governance, especially for participants not familiar with economics. To this end, Iain Begg from the London School of Economics provided an extensive overview of the state of Economic Governance, Jacques Le Cacheux from Université de Pau elaborated on the different issues of the Euro zone and Jean-Victor Louis from the Université Libre de Bruxelles focussed on the legal and institutional aspects of an economic and financial union. Finally, Jacques Pelkmans from the College of Europe completed the introduction into the topic, by discussing different possibilities to enhance growth within the European Union.

Extensive insights from the practitioners’ point of view were given among others by Carsten Pillath, Director General of the DG Economic Affairs and Competitiveness in the Council of the EU who discussed actively with the participants the complexity of the institutional constellations within the framework of Economic Governance. The participants especially appreciated his insights into the way European Council meetings actually work, because they represented a perfect preparation for the later Simulation Game. Moreover, the Summer School aimed at identifying the different national perspectives of euro-insiders and -outsiders. To this end, Brendan Donnelly from The Federal Trust in London focussed on the perception by the United Kingdom; Cinzia Alcidi from the Centre of European Policy Studies in Brussels discussed with Georges Siotis, Member of the Task Force “Greece” of the European Commission, the evolution of the Greek case and Jean-François Jamet from Sciences Po Paris pointed out the Franco-German controversies.

Furthermore, the participants were offered time slots for extensive informal pre-negotiations among their delegations. They were assisted by Iain Begg who accompanied the Summer School as this year’s

THESEUS Resident Researcher. Beyond own teaching, he was animating the debate, supervising the working groups and advising the participants on an individual basis, too.

Before and during the European Council meeting, the participants made remarkably use of the full range of means of virtual communication and were especially taking advantages of all breaks to coordinate their work and to find allies for their positions. Even if the negotiations remained friendly and respectful, there could be observed some heated debates on certain issues, especially prior to reaching a final agreement. Last but not least, the European Council Simulation was observed and evaluated by Wolfgang Wessels, chairperson of THESEUS and professor at the University of Cologne. The evaluations submitted by the participants showed that the Summer School with the Simulation Exercise was a very successful and beneficial event.

For further information such as the final report, the conclusions and pictures please see on THESEUS Website.